By Greg Acinapura
Back
Article 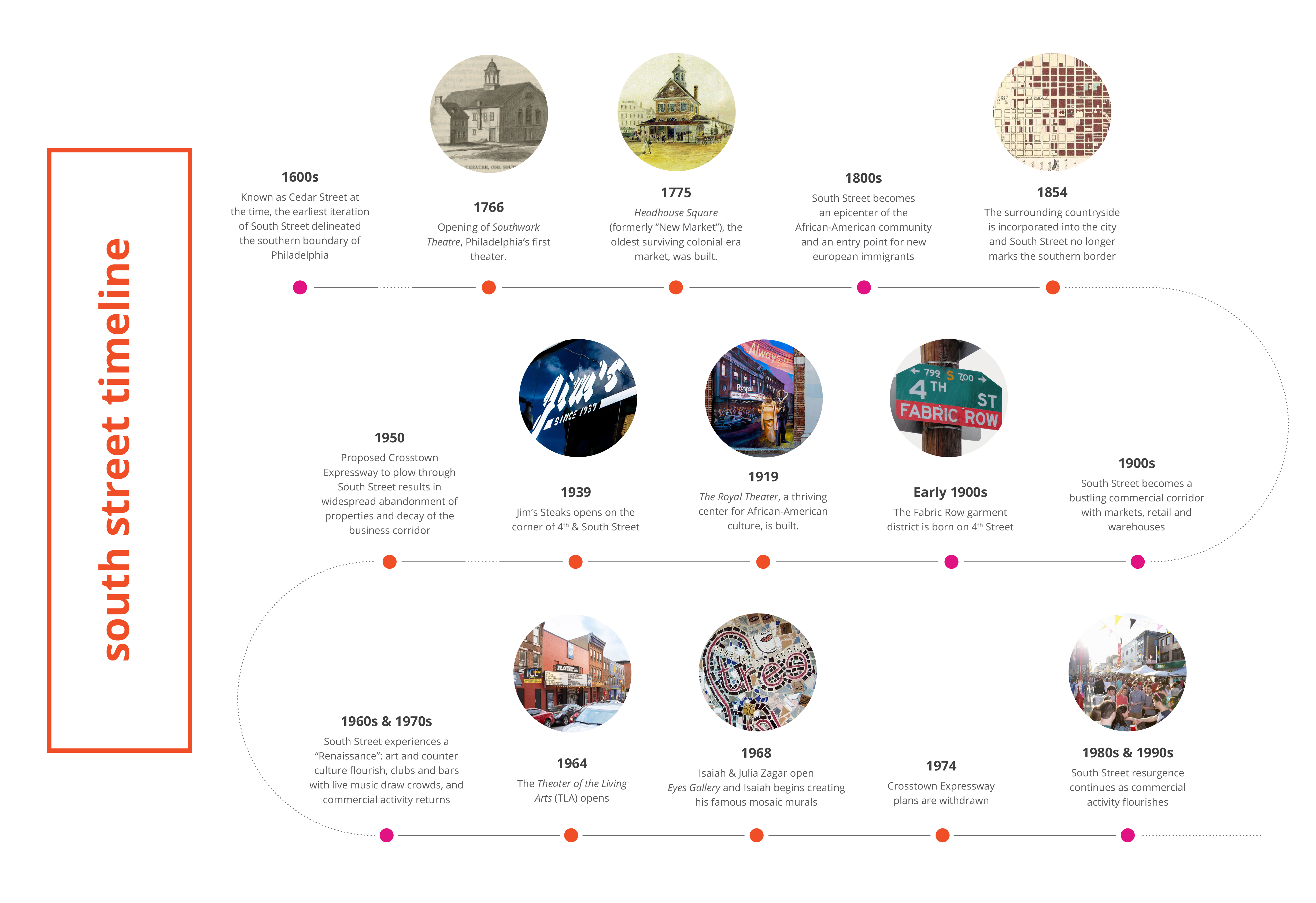 What comes to mind when you think of Philadelphia’s historically rich South Street? Do you trace back to somewhere along this timeline; when African-American entertainment thrived at the Royal Theater and consumers flocked to Philadelphia’s Jewish garment district for textile shopping along 4th Street’s Fabric Row? Or do you think about the plummeting real estate values and widespread abandonment of South Street after Edmund Bacon proposed the Crosstown Expressway? Maybe you remember how reduced property rates attracted artists, musicians and hippies from the counterculture movement, transforming South Street into a trendy bohemian hub that inspired song lyrics like, “Where do all the hippies meet? South Street, South Street,” by Philly-bred R&B Group, The Orlons.

Regardless of what initially comes to mind when you think of South Street, the distinct corridor has held numerous identities over the decades and its very mention tends to evoke many different emotions in the Philadelphia community. South Street is home to a collection of unique and eclectic tenants and has been that way for years, with staples like Jim’s Steaks and the Theater of Living Arts representing the lively commercial and entertainment district that came to be known as the “hippest street in town.” Even with west of Broad development hampered by demolition threats from the proposed Crosstown Expressway, it has since turned around and currently hosts incredible restaurants and retailers like Ants Pants Café, The Cambridge, Anjali Yoga and more.

South Street west is flourishing with new retailers like Freehouse Fitness Studio and Cynergy Hair Studio. The facade of the Royal Theater is under preservation and The Goldenberg Group just purchased the World Communications Charter School building at the corner of Broad and South. Dranoff Properties anchors Broad Street with South Star Lofts, where City Diner recently opened in the former Juniper Commons, bringing a classic diner feel with a cocktail bar twist to the high trafficked corner.

Despite its close proximity and connectivity to virtually every Philadelphia neighborhood and the growth of development west of Broad, South Street’s retail vacancy east of Broad still remains high. South Street east is generally avoided by locals and has become the capital of adult X-rated stores and smoke shops. The once thriving entertainment and nightlife that hosted live music for artists like Will Smith and The Beatles no longer exists. Instead, the area has become a local hangout for teenagers and young suburbanites. The independent vibe from the past has diminished and is now replaced with high turnover boutiques and an overall lack of authenticity.

Just a few blocks away, Fabric Row between South and Christian Streets remains a destination for textile shoppers as third generation fabric vendors, along with a new generation of boutiques and businesses encompass the area. Independent shops like Moon and Arrow, new restaurants such as Hungry Pigeon, and a boutique hotel currently under construction on the corner of 5th & Bainbridge aim to bring new life to the area.

As we look ahead, I believe the artistic and cultural rebirth of the “South Street Renaissance” that we saw in the 60s and 70s is coming back. The hip vibe that once accompanied the area is reemerging in pockets, slowly filling in the vacant gaps. Influencers like well-seasoned chef, Kevin Kramer of Woodrow’s Sandwich Shop, is taking the simple idea of a sandwich and making it perfectly gourmet, yet still approachable. Milkboy Philadelphia has expanded to the corner of 4th and South, bringing a coffee shop vibe during the day mixed with a live music venue at night. Joynture is introducing a co-working environment to the Pearl Arts building, with over 30,000 SF of creative office space along with a KicksUSA on the ground floor. And all of this is just on the 400 block!

So, where is the future of South Street headed? South Street is a cultural hub bursting with potential, perfectly situated in Center City. Whole Foods and ACME already serve as the neighborhood anchors, and health-friendly concepts like Sip-N-Glo Juicery are following suit.  Midwood Investment and Development just purchased a portfolio of properties, which will surely bring massive change to the east of Broad South Street corridor. A savvy developer who can aggregate a critical mass of properties and properly merchandise its tenancy is the change agent the block sorely needs.

At MSC Retail, we believe the goal is to curate a vibrant mix of local and national tenants, as well as attract Philadelphians to the area for reasons other than needing a Halloween costume. It’s time to continue the revitalization of one of Philadelphia’s most famous streets by contributing to its already diverse urban mix of restaurants, bars and shops. Visit MSC Retail’s properties page for all of our South Street listings.